Peckford42: Enemies of the People – Covid-19

Any fan of the James Bond films knows that S.P.E.C.T.R.E. is the nefarious global organization whose symbol was an octopus, because its influence extended everywhere, and it could manipulate world events.  If we didn’t know better, one might think Dr. Anthony Fauci’s gain-of-function research was actually a S.P.E.C.T.R.E. operation, because Covid has become a society-destroying octopus in ways that go far beyond making elderly people sick.

The foolish and unnecessary lockdowns will kill more people and create more suffering than the virus, thanks to both short-term and long-term effects on mental and physical health.

Cancer screening and treatment is one such area where the Covid policy octopus has done, and will do, tremendous damage.  Cancer screening in the U.K. was suspended and routine diagnostic work was postponed following the lockdown beginning in March of 2020; a British study reported sobering findings:

Substantial increases in the number of avoidable cancer deaths in England are to be expected as a result of diagnostic delays due to the Covid-19 pandemic in the UK. Urgent policy interventions are necessary, particularly the need to manage the backlog within routine diagnostic services to mitigate the expected impact of the Covid-19 pandemic on patients with cancer.

A plot worthy of a Bond villain.

One can find incidents of increased cancer rates across the globe.  At the Weill Cornell Medicine Center in New York City, the number of lung cancer patients seen by medical professionals declined by half during the lockdown, and there was a “significant increase in the proportion of patients with Stage IV disease” after re-opening.

In Draconian New Zealand, the backlog for breast cancer screenings stands at 50,000 and there’s been a 14 percent increase in skin cancer.  Another paper revealed that “screenings for breast, colon, prostate, and lung cancers were lower by 85 percent, 75 percent, 74 percent, and 56 percent, respectively” in April 2020.  That was just for a 6-week period at the start of this nonsense.

The entire world was already facing a mental health crisis prior to the lockdowns.  This was exacerbated by throwing people out of work for months, adding financial stress to already-vulnerable households, particularly low-income and minority households.

The Covid policy tentacles also reached far into the homes of domestic abuse.  A meta-analysis of 37 different studies showed a 7.86 percent increase in domestic violence, revealing that, “the stay-at-home measures have placed those most vulnerable to violence and abuse in close proximity to their potential abuser, and this may lead to a continued increase in the risk factors associated with domestic violence.” 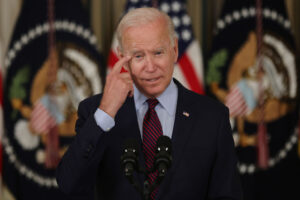 There are 10 million incidents of domestic violence annually.  As if all this trauma and its mental and physical effects on victims weren’t enough, the lockdowns forced the abused right back into the home with their now-unemployed abuser. The mean increase, according to the meta-study, was another 76,800 incidents of violence, mostly against women.

Fueling this violence, as well as being a separate category of collateral damage, was the rise in hazardous alcohol use.  Another study found hazardous alcohol use increased from 21 percent among April 2020’s cohort to 40.7 percent for the September group. Alcohol dependence exploded from 8 percent to 29 percent. 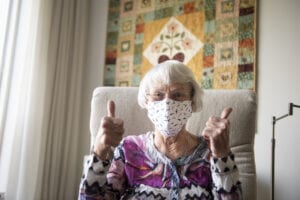 She’s fine, really she is.

We already know that Covid was harshest on the elderly, especially those trapped in nursing homes.  While everyone needs human contact, and the lack of it was unquestionably harmful to most people, the elderly suffered the most.  They are already isolated, often forgotten or disposed of, by our culture.  The lockdowns prevented  family from visiting them.  Grandchildren are a source of joy, optimism, and energy for so many older folks, and they were robbed of that resource.

Yet beyond that, the caregivers in these facilities were so busy caring for those with the virus, that those without it were sometimes neglected.  Inspectors and advocates could not visit and maintain proper working conditions.  This story from the Associated Press goes into sad detail on this travesty.

Hale and happy before the pandemic, the 75-year-old retired Alabama truck driver became so malnourished and dehydrated that he dropped to 98 pounds and looked to his son like he’d been in a concentration camp. Septic shock suggested an untreated urinary infection, E. coli in his body from his own feces hinted at poor hygiene, and aspiration pneumonia indicated Wallace, who needed help with meals, had likely choked on his food.

“He couldn’t even hold his head up straight because he had gotten so weak,” said his son, Kevin Amerson. “They stopped taking care of him. They abandoned him.”

The tentacles yanked children out of school for no reason whatsoever.  Not only are children the least likely to suffer any ill effects, but they have the lowest chance of mortality unless they are severally ill already.  The most vulnerable populations were, again, disproportionately impacted.

Young children not only require education, but a vital part of childhood development is seeing faces, reading cues, and simple social interaction.  They were robbed of all these things.  Worse, they were thrown onto computers to allegedly learn.  As if they weren’t already spending enough time staring at screens, now they were supposed to have long attention spans to absorb lessons.

Now imagine everything you’ve just read, and consider the long-term effects of each of these issues on each demographic as this insanity continues.  Then consider all the other vulnerable populations that weren’t even discussed.

It’s not unreasonable to suggest that the government and media are policy terrorists. They struck terror in the minds and souls of Americans, particularly the most vulnerable.  Most of this data was available early in the lockdown, yet no changes were made. And now, in light of Joe Biden’s speech today, it’s unconscionable. But it’s going to continue unless and until the American people demand a stop to it.