Fed Up with the Fed’s Abuse of Power

One phrase describes the Fed’s pillaging of the nation to benefit the few at the expense of the many: abuse of power.

Let me translate the incoherent ramblings of Chairperson Powell: let them eat cake (or more precisely, let them eat brioche), for increasing wealth and income inequality has been the Fed’s prime directive since The Maestro Alan Greenspan began the Fed’s manipulation–oops, I mean management–of the stock, bond and risk markets in the early 1990s.

The fatal synergies unleashed by the Fed’s abuse of power were already apparent to Greenspan by December 5, 1995 when he issued his famous warning that equities were exhibiting “irrational exuberance.” The irrational exuberance of those early days of the Fed’s abuse of power–stripmining the middle class to boost the wealth of America’s top tier–now look positively quaint compared to today’s Fed-fueled speculative mania which has poisoned the entire society and hoisted the economy on a rickety ladder to the sky that will crush everything below when it finally snaps.

It would be refreshing to dispense with the Fed’s pathetic, tissue-thin rationalizations for making the rich richer: we’re just trying to boost inflation (the surest way to impoverish the bottom 90%) and increase employment… oh right, which must be why labor’s share of the economy has been in a free-fall for the past 30 years of Fed manipulation / abuse of power. (see chart below)

Let the record show what the Fed has accomplished: 1) inflating three ever-more destructive speculative bubbles and 2) unprecedented extremes of wealth and income inequality. The Billionaires are grateful for the free trillions the fossilized Politburo showers on the super-wealthy while destroying the safe yields that once benefited the middle class.

One phrase describes the Fed’s pillaging of the nation to benefit the few at the expense of the many: abuse of power. When will America finally end the Fed’s reign of inequality and ever more extreme abuse of power? When will we finally ease this disastrously fossilized Politburo into the dustbin of history? If we cannot do so, the nation’s financial collapse is easily foretold. 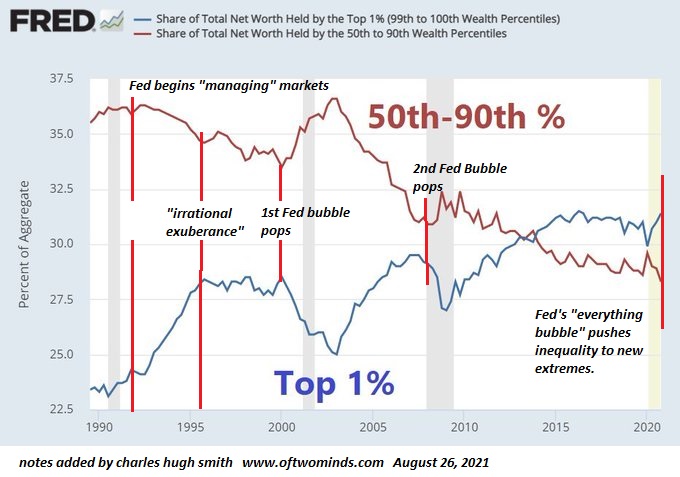